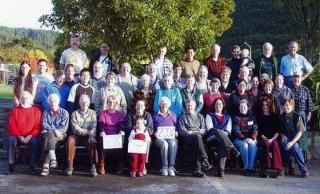 Held at the Teapot Valley Christian Camp, Brightwater, Nelson, South Island from 9th to18th of May 2004 There was also a press release about the foray.

by Petra White Introduction
The 18th annual NZ Fungal Foray was held this year from 9-18 May at Brightwater, Nelson. Forty professional and amateur mycologists from around New Zealand and a few from overseas attended the Foray. Accommodation was at the Teapot Valley Christian Camp, owned and operated by a Christian Trust represented by five churches in the Nelson region.

Each day's foraging involved collecting in the field and then identifying our finds back at the Teapot Centre, labeling them and displaying them on tables set aside for the purpose. Many of the collections were then dried to take back to the Landcare herbarium in Auckland. This was my second Foray and, as with last year's Foray, I set myself the task of keeping track of all the species collected and where found.

Some highlights from the Foray include finding Gloniopsis praelonga, the second NZ record of this species. Sarcosoma orientale, a rare cup fungus, an undescribed Russula and Tricholoma. Monday 10 May
For the first day of foraging most of us went to Flora Ridge, a forest of red beech (Nothofagus fusca) and silver beech (N. menziesii) with magnificent displays of mosses and lichen in the understorey. Pseudocyphellaria spp. were common. The tiny black fruiting bodies of Hypoxylon bovei, with spherical shape, flattened apex and central nipple, were commonly seen on rotting wood in ground litter. There were wonderful displays of the purple fruiting bodies of Cortinarius magellanicus and Laccaria spp. were commonly seen growing from the ground.

Tuesday 11 May
This day many of us went to Abel Tasman National Park (Canaan area), also red and silver beech forest, but this time set amongst a dramatic karst limestone landscape. This was a day for the dedicated mycologist as it rained and was bitterly cold! Two species of honey mushrooms were recorded from this site (Armillaria hinnulea, A. limonea), growing in groups on living trees. One fascinating find from this area was Vuilleminia sp., a bright red fungus coating dead wood.

Some people went to Eve's Bush with TVNZ and there was an article in the Tasman Times about the Foray. After dinner that night Pam Catcheside showed pictures of fungi collected in South Australia during the 2003 season.

Wednesday 12 May
The Colloquium is an event started on the 16th Foray, a day set aside for talks on various fungal subjects.

Jerry Cooper, Landcare Research, started the day with a talk on aquatic fungi, approximately 95% of which are ascomycete and 5% basidiomycete. Examples of these fungi cause gill rot of fish, crayfish plague and amphibian plague. He spoke on two groups of aquatic fungi. Ingoldian fungi are 10-100 microns in size and grow and sporulate asexually on submerged terrestrial litter in running water, and the spores are four armed in shape. Aero-aquatic fungi grow and sporulate asexually on litter in still and stagnant water and are helical or basket shaped.

Andrew Millar from Chicago, USA, next spoke to us about his fungi group, the Sordiariales, of which there are 3 families and 35 genera. He told us that the 33,000 known ascomycete species represent 45% of all described fungi, though there may be more than this with the addition of aquatic fungi. His research has shown that ascomal walls are more useful in predicting phylogenetic relationships in the Sordiales than ascospores.

Then came Jennifer Bannister, Dept of Botany University of Otago, who spoke of fossil epiphyllous fungi on preserved fern leaves from the Late Eocene. In the fungal records fungi are preserved as hyphae, spores and fruiting bodies. Over 1,000 fossil fungal species are recorded. Julia Russell, University of Canterbury, then talked about arbuscular mycorryzal fungi in New Zealand forests. Her work is on fungal infection on the roots of liverworts and podocarp species.

Peter Johnston, Landcare Research, then talked about how wild plants need mycorryzal fungi. Some overseas research indicates mycorryzal association helps in plant diversity. In New Zealand there are more than 900 fungal species associated with five species of Nothofagus and they play key roles in basic ecosystem health. He asks will fungal species come of their own to restoration areas? Nursery plants are raised without mycorrhizas, so there is less diversity of fungal species in planted forests as opposed to natural forests. A study of Tapapakanga manuka stands showed 11 species of fungi in natural stands as opposed to 4 species in planted stands and those in the planted stands are weedy unspecialised fungi typical of disturbed sites.

After morning tea Harold Burdsall Jr told us about some polypore species in the USA. He explained how five Polyporus species were confined to specific areas in the States. P. sulphureus occurs on oak in eastern USA and on conifer in western USA. Laetiporus sulphureus, with its bright orange cap and yellow pore surface, causes brown rot in Quercus species but is very edible and can be collected in quantity.

Ross Beaver, Landcare Research, then gave a talk on earthball species Pisolithus, commonly called "dead man's frost" or "horse-dropping fungus". It is a widespread mycorrhizal species. There are c.12 species recognised using DNA sequences. In Australia there are more than 6 species associated with eucalypts and acacias. In NZ it is restricted to the Taupo volcanic zone (a narrow band from Lake Taupo to White Island) on geotheremally heated soils and associated with Kunzea and Leptospermum. The three New Zealand species (P. marmonatus, P. albus and an undescribed species) are also found in Australia. He concludes that all three species arrived here from Australia through long distance dispersal. The geothermal area provides an ideal climate not found elsewhere in New Zealand.

Geoff Ridley and Todd Ramsfield, both of Forest Research, talked on three Armillaria species, commonly known as honey mushrooms. A. novaezelandiae occurs throughout NZ and is viscid, olivaceous with a narrow dark stipe. A. limonea is yellowish with sandpaper like scales. A. hinnulea is pinkish brown and not viscid and confined to the northwest South Island area. All three of these species were collected on the Foray. There is a question as to whether A. hinnulea is a recent invader to the country but no conculsions can be drawn yet.

Lunch and then Kentaro Hosaka, Oregon State University, gave us a talk on the molecular phylogenetics and biogeography of the genus Hysterangium and related taxa. David Orlovich, University of Otago, next spoke on research projects he has conducted in Otago. One such project was studying the microbial diversity in canopy soil. He has been collecting soil samples in the forks of trees. Tree roots move into the soil and these are ectomycorrhyzal. There are 76 ectomycorrhyzal fungal genera described in NZ, 64 being basidiomycete, 11 ascomycete and 1 zygomycete. Of these 42 associate with native trees, 10 with introduced trees and 24 with both. David has also been mapping fly agaric (Amanita muscaria) in an urban park and the fruiting bodies that are genetically identical. He has discovered that there is an overlapping pattern of subsurface relationships.

Following David, Eric McKenzie, Landcare Research, gave an entertaining talk showing photos of stamps with fungi featured on them. For me this was the most interesting talk of the day and it would be fascinating to see his stamp collection. Approximately 160 countries have issued stamps with fungi on them. The first issue in NZ was in 1977 with fairy tale stamps with fungi, then in 1988 there was a stamp featuring a brown kiwi with mushroom. In 2002 there was the issue of 6 stamps for the Year of the Fungus featuring Don Horn's photographs. Fungi have also featured on phone cards in NZ. Other examples from other countries in his collection include fungi with boy scouts and girl guides; Albrecht Duerer paintings showing peasants with baskets of mushrooms; modern art fungi; a fungus as food; Termitocyes, an edible mushroom growing on termite mounds (Zambia); leaf spot on a leaf caused by a fungus (Niue); stamps showing lichen and an alga; fungi found on coconuts (Tuvalu); Penicillium, a mould fungus from which comes penicillin, and Sir Alexander Fleming; fictitious countries issuing stamps with fungi. He even has a stamp with a stamp mark from "Mould Bay", showing that the fungal theme in his collection isn't always that obvious.

Alison Stringer then gave a talk on the colonial ambitions of Boletus edulis, a species introduced to New Zealand in the 19th century through trees imported in half barrels. B. edulis is restricted to Christchurch and its host plant is European birch (Betula pendula). After her came Alexi Guerin-Laguette, Crop and Field Research, whose talk was on his experience growing two edible ectomycorrhizal mushrooms, red milk caps (Lactarius) and the Japanese matsutake (Tricholoma matsutake).

After afternoon tea Dan Mahoney showed slides of some of the smaller fungi from last years 17th Fungal Foray in the Kaimais; Peter Austwick gave an entertaining talk about the culinary delights of truffles; Karl Soup showed slides of some Cortinarius fungi; and finally Teresa Lebel showed us posters on bryophytes and fungi and education kits in Australia.

Thursday 13 May, Workshop
Thursday was set aside for a workshop presented by Dr Harold Burdsall, USDA, Madison, Wisconsin, on corticioid (crust) fungi. Wood decay basidiomycete fungi are a very heterogenous group, the only factor share in common being the substrate. Even the substrate is variable, as they can occur on hardwood, softwood, palms, ferns and leaves. The workshop started with a talk and then we went on a trip to Eve's Valley Scenic Reserve to collect specimens. This reserve turned out to have a very high diversity of fungi. Back at the Camp we worked with microscopes to learn what features to look for in identification.

In the afternoon we viewed a Taylor Lockwood DVD, Treasures from the Kingdom of Fungi, followed by a short and amusing film on the 2002 Foray at Haast.

After this we were shown slides from the Bioblitz, a biodiversity initiative organised by Landcare Research. Its purpose was to count as many kinds of life (excluding humans), dead or alive, as possible in a 24-hour survey of two Auckland parks, Dingle Dell Reserve, St Heliers, Auckland, and the bush gully and grounds of Meadowbank Primary School. It was held on Friday 30 April and Saturday 1 May 2004. This was the first event of its kind staged in NZ and taking part in it were entomologists, mycologists, ornithologists, ichthyologists, limnologists, herpetologists, lichenologists, bacteriologists, parasitologists and many other '-ologists'. At the end of the 24 hours, Conservation Minister Chris Carter announced the grand total. 925 species were found in Dingle Dell, and 631 from the smaller Meadowbank School site. It is hoped that this Bioblitz will be the first of many.

After dinner we were told us about Fungimap, a project started in South Australia to map the distribution of fungi species. There are 100 species on the list for people to look out for and record their location. A newsletter goes out to 700 people, about 30 of whom are the main recorders. Hopefully, we will one day get a similar project up and running here in NZ.

Friday 14 May
On this the last day of the Foray I went foraging with Ross and Pauline Muir to the Nelson Lakes area. On the way we visited a property on the outskirts of Nelson and walked with the owner over the property, looking at various fungi she pointed out. A highlight for me at Nelson lakes was a lichenfield of Cladina mitis (= C. leptoclada) and C. retipora making a dramatic white carpet under manuka (Leptospermum scoparium). Finally, we had a discussion of next year's Foray, which will be held at Turangi.