Held at the Waiora Scout Camp from 11th to 17th May 2008. A mycological colloquium was held at the St Margaret's College, University of Otago. The program is available here.

The report by Petra White can be found here: Report on the 22nd NZ Fungal Foray (Dunedin, 2008)

By Jerry Cooper 10th February 2009 A complete species list can be downloaded here.

Sites with most collections:

More details and images of these collections, and all other foray collection deposited in PDD can be found on the nzfungi website.

Clitopilus argentinus Egon Horak in ‘Agaricales of New Zealand Volume 1’ describes two collections of Clitopilus close to C. hobsonii. The two foray collections of a Clitopilus are identical to each other and have spores close to PDD88168 but context and size closer to PDD88169. However, the foray collections match exactly C. argentinus known from Argentina and North America. It is characterised by distinctive hyaline crystals encrusting the cap hyphae that are not present in C. hobsonii. C. argentinus is separated from another similar species, C. incrustans, by a lack of brown plate-like pigments. Scale=1mm bars 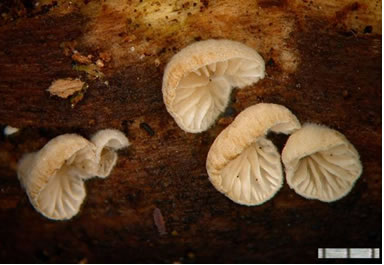 Entoloma rusticoides, Pluteus nanus, Volvariella taylori These are European species that were collected in sand dune habitats during the foray. Sand dunes in New Zealand are poorly studied for fungi. These collections were all associated with Marram grass fore-dunes. Marram was introduced into New Zealand in the 19th century from Australia, where it was originally introduced from Europe. It was used to stabilize dune systems, with the unfortunate consequence of significantly decreasing areas of natural biodiverse dune ecosystems, and excluding native species such as Pingao. The foray sand-dune collections included a Hohenbuehelia initially thought to be the European ‘Red Data’ species Hohenbuehelia culmicola. However that species has a distinct stipe and dark colouration not possessed by the Otago collection. The collection does however match a collection of ‘Hohenbuehelia culmicola’ seen by the author 22 years ago in Yorkshire (FRDBI 774018). Interestingly Entoloma rusticoides also occurs on a number of European Red Data lists). It would be interesting to know by what route these fungi arrived in Otago! Entoloma rusticoides 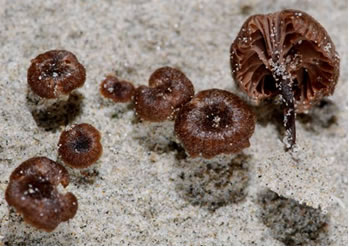 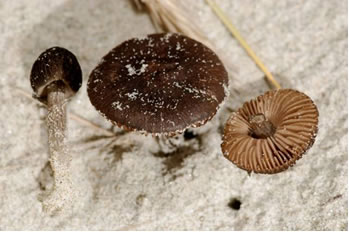 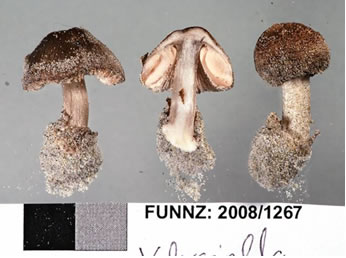 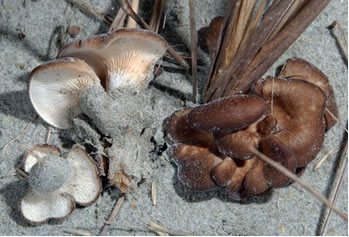 Mycena austrofilopes This distinctive taxon has been collected a number of times in New Zealand but only recently recognised. It can be mistaken for Mycena cystidiosa, especially in New Zealand where M. cystidiosa does not seem to be frequently accompanied by sterile stipes. M. cystidiosa does of course have characteristic metuloid cystidia (itself not to be confused with Hydropus funebris which looks like a Mycena and also has metuloid cystidia). Melanotus citrisporus This species was only known from the Type collection on dead Astelia leaves from North Island. It was found twice on the foray from different locations and also on dead leaves of Astelia. It has very distinctive spores. Scale=1mm bars 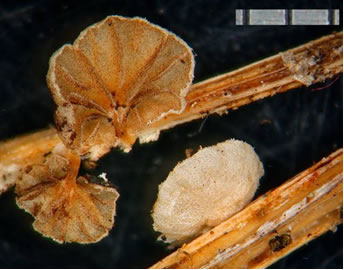 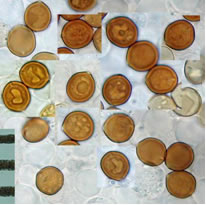