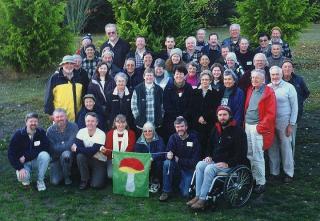 The foray in Fiordland was one of the most awesome weeks ever! There were about 50 participants based at Te Anau from the 6th – 13th May. People came from all over New Zealand, from Australia, the USA and Switzerland. We split into groups and spent most of the week collecting fungi at different sites in Fiordland. The group I was with spent the first full day collecting at Te Anau Downs on the road to the lake. It was a mixture of Nothofagus forest on one side and Leptospermum on the other. One of the most common and diverse genera we found was Cortinarius. This is the largest genus of mushrooms in the world and people estimate that there are probably 300-odd species in New Zealand — most of them undescribed! They ranged from small pure white mushrooms with a slimy cap and stipe to huge purple, yellow, green and brown ones. The thing they have in common is that they're all mycorrhizal, they all produce a rusty brown spore print and the spores have a rough ornamentation. It seemed for a time that every mushroom collected was going to be a Cortinarius but there were plenty of others to find. We found a relatively rare relation of Cortinarius that has a rooting stipe — it went down about 10 cm below the ground — called Phaeocollybia. Each day we came back with far more collections than we intended. People were collecting everything from lichens to caterpillar fungi (Cordyceps sp.) to leaf endophytes and everything in between. Collection sites also included Milford Sound, Lake Gunn, the Kepler Track, Borland nature trail, Borland Saddle and the Grebe Valley Lookout. Each night we had dinner (catered for by Lawre Taylor) and then relaxed with a beer for a slide show or talk put on by some of the participants. Don Horne has just produced a new book called Mushrooms and Other Fungi of New Zealand (Reed New Zealand Nature Series) and this was launched on one evening. Don gave an inspiring practical talk on how to photograph fungi in the field and showed us how he does it with a minimum of equipment. On another night the Australian botanical artist Katie Syme gave a talk on painting and dyeing. After the talks the most keen people then retired to the "lab" we set up in a disused restaurant. Many people were up till well after midnight each night trying to identify as many of the day's collections as possible. The organisers ran a competition for the biggest, the smallest, the smelliest and the 'most anatomically-correct' mushrooms. Alison Stringer from Otago University and Wang Yun from Invermay won a prize for the most anatomically-correct fungus with their collection of a Cordyceps species with a big caterpillar attached. Some of us were lucky enough to be able to participate in a workshop with Dr Egon Horak who was visiting from Switzerland. We spent the best part of a day learning how to collect and describe fungi for taxonomic study. Some important points we learnt included: making collections of no less than three fruit bodies at different stages of development; being very careful not to touch the upper part of the stipe (there might be little 'hairs' (caulocystidia) there that can be damaged easily); cleaning off any dirt from the specimen in the field; and recording the colour and shape of the mushroom as soon as possible after collection. The Australasian Mycological Society conference was held for the first time in New Zealand on Monday 8th May and this was a very interesting day too. Topics of talks included edible mushrooms (by Wang Yun from Crop & Food at Invermay), pathogenic polypores (by Peter Buchanan from Landcare in Auckland), mycological history (by retired veterinary mycologist Peter Austwick), lichen phylogenetics by Otago student Nina Hesom-Williams, biosecurity by Geoff Ridley from FRI at Rotorua and insects that eat slime moulds by Rich Leschen from Landcare Auckland. Otago University honours student Anne-Maree Oliver won the prize for best student presentation for her talk on Gymnopilus in New Zealand. All in all it was a fantastic week. I for one am inspired to be a fungal taxonomist! The organisers (Peter Buchanan and Peter Johnston at Landcare Auckland and Geoff Ridley at FRI Rotorua) should be congratulated for organising such a great week. I can't wait for the next one!